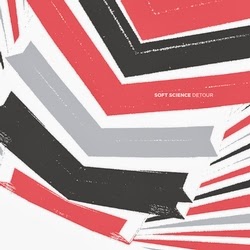 I love it when a really good band becomes even better.  So much for the sophomore album slump or jinx!  Soft Science, a Sacramento four piece, has presented us with a heaping second helping of their beautiful sound and it tastes absolutely delicious.  Highs and Lows, their debut was delectable in itself (my #37 pick of 2011 seen here), but in a subtle way they have tightened all the unnoticed loose screws and polished the surface.  The result is an emboldened set of songs - the keyboard layers create a soft canvass, singer Katie Haley’s pleasant voice is more upfront, Matt Levine’s guitars are sharpened, while his twin brother Ross Levine’s drums and bassist Mason DeMusey’s foundation for the songs is sturdy, and strong and highlight’s throughout.

All of the signposts of their sound remain intact.  There is a definite Lush influence, but increasingly now more in common with Split or Lovelife than the dreamier early EPs and Spooky like their debut.  But what strikes me is how much this reminds me, in feel, of the wonderful and criminally overlooked Erotica album from The Darling Buds.  The band sound so locked in to what they’re doing that the entire album sounds effortless, open and free, despite the heartbreak strife presented in many of the lyrics.

The opening track, “Nothing,” is an excellent transition from LP one to two.  The song begins with a dreamy guitar strum and voice and slowly adds instruments and momentum as it builds.  Haley repeatedly sings “there’s nothing left to give” about a dying relationship and fittingly the song feels a little bit stifled and ends before coming to a musical peak.  It’s a perfect matching of sentiment and music, while also allowing the flow of the album to take us to the musical highs that lie ahead.  There’s not long to wait, as “Light” and “Feel” immediately provide pure pop highs.  “Light” shuffles along nicely, but it’s the melancholic keyboards that hint at the story of separation and longing in the song’s lyrics.  Meanwhile, the heavier “Feel” is absolutely brimming with the wah-wah guitars and grooving bass line that hints at the great singles from the old “Madchester” scene, similarly, the shimmering and buzzing beauty that is “Blue” could’ve been the hit single that the Darling Buds needed on their second album Crawdaddy – so too the urgent, swift, and addictive as can be “Cold” (yes, all of the song titles are one word).  It’s fun to hear songs like this again.  Of course, I’m also a sucker for songs like “Gone” and “Falling,” which both strive for a big sound.  Both songs surge with a deep low end, solid mid tempo drums (I especially love the syncopated beat in “Falling”), and plenty of room for the vocals and guitars to shade in the colors and moods.  Hell, the entire album is top notch.  The album is available as a download, but there is a limited vinyl edition (with download code) of 200 that is a must have, which I highly recommend.

There’s something very intriguing brewing in California’s state capitol these days and thankfully, Test Pattern Records has sprouted up to document some of this great music.  I’m beginning to believe that if bands such as Soft Science, Arts & Leisure, and Desario don’t come to grace Portland with some live performances soon, I may have to make a road trip.