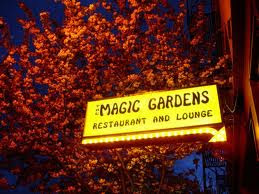 It’s still dark outside, as it is every morning I go to work. I climb onto the crowded and blaringly bright Max and keep my focus on the floor. I’m wearing sunglasses, which are irritating, but the only way I can possibly partially conceal the wreckage that is my face. A face that feels like it’s creeping out over the top and the sides of the frames. People clear a larger space than is necessary for me, as I try to settle into an open corner by the door on the opposite side of the one I entered on. There are no open seats. I felt humiliated yesterday, so I stayed at home. This morning, I don’t feel anything.

Everything was all smiles and giggles. Halloween at the dive strip club we wound up at after about 10 other stops around downtown, and I was standing behind D as he talked with Kat backstage. Kat was our stripper a few minutes before. The stupid turban from the borrowed tossed together costume I was not trying too hard to pull off kept falling off my head. I fiddled uncomfortably with the fake taxi ID badge stuck to my chest as I tried to figure out where the others had disappeared to. I mumbled something to D about how Kat wasn’t going to come to the party that we had heard about happening over off of Belmont. What? Oh, she is coming? Great. Whatever. I stumbled out into the cold damp air outside to find the rest as the house lights came on for closing time.

“Oh, you’re such a cutie! What do you do?”
“Hey, Shan, surprised to see you down here…”
“We’re heading to that party we heard about when we were over at the Paris…”
“I’m doing some consulting right now…”
“What are you up to tonight?”
“Looking hot!”
“Can I get a smoke?”
“How long have you been a stripper?”

The voices from multiple conversations faded into the late night air as I strode forward beyond the rest. I lit a cigarette and felt my throat burn. Where was this party again?

“What the fuck are you gonna do about it?!”

I turned my head, as I heard more shouting. There were suddenly a lot more voices, a bunch of voices, yelling in indecipherable accents. I saw Jeff surrounded by a bunch of thugs. What happened to D and Ryan? Kat and Shan? I was several blocks ahead. I sprinted back trying to figure out what the hell was happening. Jeff tried to defend himself from the attackers, but he was severely outnumbered and wearing a catholic bishop’s robe, which constricted his movements. Stupid Halloween.

Down he went, just as I arrived swinging wildly and randomly at the crowd. Too late. I felt a crack on my right knuckles before finding myself grabbing onto a couple of these attackers in some thoughtless effort to pull them down with me as hit after hit crashed across my face. Then I heard a voice above the din, the gang ran away and all became quiet, which urged me to scream obscenities at the cowards running away from us.

An older woman keeps staring at me. I don’t know what she sees, but I can almost see the wheels turning in her head as she forms some kind of explanation for why I look the way I do and how I’ve invaded her life. Maybe she could simply ask me. Maybe I’m just being paranoid. Maybe it’s the whiskey I had to drink before heading out this morning. I turn my attention back to the floor of the train and try and forget about anyone around me. I’m simply a man on his way to work.

“What happened tonight?” the nice nurse asked me in emergency.
I tried to form words to answer, as I spot Ryan over her shoulder with a grin on his unscathed face, “I, uh, I’m not sure.”
She was pressing a giant Q-tip around my eyes and it stung to an extent that I started feeling woozy and nauseous.
“We were jumped by a gang of Russians,” Ryan interjected.
“What time is it?” I asked.
I was trying to remember what his stupid costume was. It was gone now. What happened to the turban? Why was D’s laminated bloody picture still clipped to my shirt?
“How’s Jeff doing?” I asked no one in particular, since no one responded to my last question. The sound of my own voice was muted like it was coming from somewhere else.
“He’s conscious now. He’ll be okay, honey. He’s getting X-Rays, which is where you’ll be going when we’re done getting these stitches in,” the nurse let us know.
“What time is it?” I tried again. I noticed that I could see the shadow of my own face closing in on my peripheral vision as it swelled.
Ryan left. The nurse soon followed.
“The doctor will be in to put those stitches in shortly dear,” she told me over her shoulder.
Sometimes I believe that I am destined to spend most of my life waiting around in examination rooms like this one. I belong here. My disease has been dormant for a few years now, so I needed to find a new way to get in. I laughed and fell back onto the flat gurney.

I adjust the sunglasses as I walk down the crooked sidewalk in an effort to get them out of the scarring the frames have settled into. Time for work. When I phoned in ‘beaten up’ yesterday, I’m pretty sure that it created more questions than it answered. In my defense, I could not see, and the nurse had recommended that I not go in. She was very nice. I liked her.
“What the -?!” I shout, startled. A rogue sprinkler suddenly sprang out from the recently rolled out grassy knoll next to me spraying my legs with a focused intensity. I stop and glance at my wet pants and begin laughing because the water attack avoided my crotch. I remove the sunglasses, as the first sign of daylight creeps over the reflecting glass of the miles of business park mazes I work in. “I expect these attacks during the summer,” I scold the sprinkler head, “but not in November.”

Posted by chriswreckage at 8:21 PM 2 comments: