Keeping a Balloon in the Air 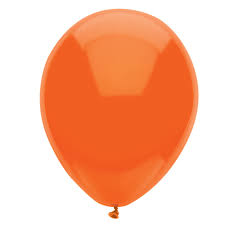 “Go ahead and sit down,” Jaime directed after stopping the timer in her hand.  “Good job!  Do you need some water?”

It was a little early to be wrapping up that day’s session, but I was exhausted from trying to balance on the half yoga ball things while trying to bat a balloon around.  Something was up.  Jaime was being very quiet.  Generally, we chattered through entire sessions.

She began her unbelievably fast and rather loud typing into the computer – updating my records.  This was my penultimate appointment.  Next week would be the last session of outpatient physical therapy permitted by insurance.

“You’re doing well Chris,” Jaime smiled as she glanced momentarily at me.  “Remember when you first came in and you couldn’t keep your eyes open and would get exhausted just standing for a minute?”

“Thanks to you Jaime!” I encouraged.  “These appointments are the highlight of my week!”  It was true too.  I had returned to work three months ago and was now back to full time.  I was still using a cane some of the time, but about to make the jump to no cane at all.  Despite this, I would get really depressed each day feeling like I was no longer improving.  I was committed to my assigned exercises, but I was still struggling to get around.  Still trying to get used to having to consciously think about every step or move I made, because any lapse in concentration could mean disaster.  It was during these appointments when we would go over baseline tests that I would actually see my progress.  My hard work was paying off.  It was actually the only time each week I felt any kind of joy or relief from the mountain of uncertainty and fear weighing down on my shoulders.

“Aw, that’s nice to hear,” Jaime replied sheepishly and looked down at the floor.  “There’s not much more I can do for you Chris.  Your coverage ends next session, but you’ve achieved all of the goals you need to reach.”  I looked down as well, knowing what was next.  She was getting ready to pull the Band-Aid.  She was dumping me.   “This is going to be your graduation.  Congratulations!”

This should’ve been a happy moment, but neither of us seemed very ecstatic.  I was in a state of shock, because I relied on these appointments to keep myself going and I still felt so unsure about my condition.  I can’t speak for her, but it felt as though she had more work for me.  Like she had more tools to help me recover from my stroke, but her hands were tied by the limitations of my insurance and financial means. 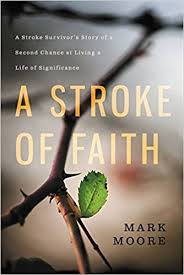 This last October, I found myself kind of reliving my hemorrhagic stroke from Halloween of 2015.  I was having a lot of terrifying dreams related to the experience at the same time as finding myself reading a book called A Stroke of Faith (2017), written by Mark Moore, which I received as a gift the prior spring when I attended the American Stroke Association’s local “Saving Strokes” golf teaching event (can we find any more plays on the word “stroke”?).  I also happened upon a powerful Netflix documentary named My Beautiful Broken Brain (2014), about a stroke survivor’s struggle to recover.  Mark Moore’s experience definitely rang familiar in many ways to mine, so I could relate in a very tangible way, but it was the moving movie that really got to me emotionally.  Though Lotje Sodderland’s experience was very different in that her after effects were more cognitive and less physical than mine, her portrayal of loss, loneliness, disorientation and helplessness was spot on, and brought tears to my eyes along with a deep sadness and underlying fear that a stroke could come back at any moment.  Her story, however, glosses over her recovery after a meaningful meeting with her hero David Lynch, and then provides the audience with a rundown that she’s basically living happily ever-after now.  It feels a bit disingenuous, especially after her big set-back within the film.  Which got me to thinking about most of the great recovery stories I’ve heard since I’ve joined this club no one wants to belong to.  Without question, all of them are heartwarming, but I’ve noticed a commonality – good healthcare coverage.  Moore’s story is well told, but a big part of it is how his great business success prior to his stroke afforded him comprehensive coverage, the ability to have the best care possible, and to take the necessary time to truly recover.  I also heard the story of a local woman who spoke at the “Saving Strokes” event I attended in 2016 who tearfully spoke about her 10 year struggle from a devastating stroke that left her unable to speak, read or write, and here she was publicly speaking about her journey.  She was also fortunate enough to have come from old Portland money and had a personal therapist guiding her through this journey.  Even Lotje, being in the UK, could recover at her own pace due to public health coverage.  I do not hold this against them.  Actually, their examples are not only of triumph of their spirits, but of the importance of having true reliable health insurance. 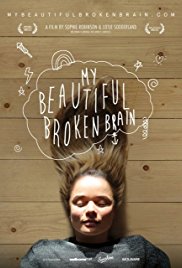 I’m not saying that I didn’t get good healthcare during my ordeal.  In fact, it was mostly excellent, once I got into the right hands.  I had some really fantastic doctors and all of my therapists (physical, occupational, speech, recreational, etc.) were exceptional, as were the rehabilitation nurses and counsellors.  What I’m saying is that our health professionals really know what they’re doing and can, with a patient’s effort and cooperation, pretty much perform miracles.  What is strange to me is that the insurance that most of us spend so much money on each year only goes so far.  The downfalls in my experience wasn’t the care itself, it was that the care was limited and had an end date before I was ready.  I consider myself lucky in that I did have insurance and help and support, but still felt the pinch financially in very real ways.  I had to return to work and learn to try to manage without help long before I was physically and mentally ready.  What about the multitudes of those who have less or no coverage?  It scares me to think about not having a safety net of some sort, because serious illness effects every aspect of a person’s life – not just physically.  Yet, as long as we have healthcare for profit as a thing, helping people will never be the end goal of these businesses – just a possible side effect of doing their business to make money for their investors.

It all makes me think about those awful weeks, after leaving the hospital, trying to pry my eyes open long enough and to summon up the stamina to address my unopened and unpaid bills, trying to read through form after form to try to secure short-term disability (who treated me like a freeloading thief), to consider looking for a way to find assisted living housing if need be, to sign up for ADA public transportation, and to navigate the nearly five day a week appointment schedule with doctors and therapists.  I could not do any of those things.  I could not do anything.  Unfortunately, I do not know how to help change things – to get it out of politics.  Maybe if everyone could feel that terror of helplessness brought on by some sort of serious health crisis for at least a few moments to understand how important true full healthcare coverage can be - to experience true empathy.  But I wouldn’t wish that on anyone.