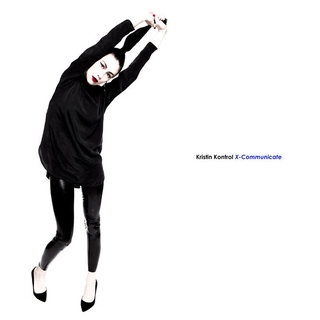 On “Trouble is My Name,” the final song of Dum Dum Girls’ 2014 album Too True, Dee Dee sang “I had a vision / I begged and I plead / I had a vision / I wanted to be dead.”  Little did we know then, that she was perhaps foreshadowing what was to come.  Dee Dee has always been the moniker for Kristin Welchez, who has steered the Dum Dum Girls since her early bedroom recordings in 2008.  Now she has decided to toss the eight years of building a loyal audience (over three fantastic albums) into the wind, as she dumps the Dum Dum Girls name in favor of Kristin Kontrol – along with a total synth pop makeover.  My first introduction to this wholesale change was early this year when this name kept appearing on my Facebook feed.  There was a 30 second video clip with a clanging techno beat and Dee Dee posing for a photo shoot.  I was shocked, and honestly dismayed, and began to panic.  It felt like a massive betrayal like when the untouchable Siouxsie Sioux shimmied uncomfortably and dawned movie star hair and make-up, pouty lips, diamonds, and a sparkly dress amidst a heart-shaped hot tub and popping champagne corks for her first U.S. hit single “Kiss Them for Me” back in 1991.  Like then, I felt like I had lost the artist who has provided many of my favorite songs in recent times – the songwriter whose words have been a comfort due to their complete understanding of utter and complete loss and despair.  Upon first hearing the lyrics quoted above, shivers rushed down my spine, because I have those desires and visions of death nearly every day and it is helpful to not feel alone in those moments.

Siouxsie and the Banshees "Kiss Them for Me"

I was completely conflicted.  I was dismayed by this short preview clip and talk of Kristin delving into the realm of some of her previously untapped Top 40 dance pop influences, yet hadn’t she completely earned the benefit of the doubt over the last eight years’ worth of excellent and often transformative music?  That 1991 Siouxsie and the Banshees album Superstition may have been impotent as compared to their previous cannon, but once I got over my initial consternation about “Kiss Them for Me” (admittedly after many years), and I began realize that the discomfort and awkwardness Siouxsie Sioux displayed in that video and the sheen of the music was perfectly fitting for the subject matter of the song.  With some excitement and anticipation and a tiny bit of dread, I went ahead and purchased X-Communicate, this debut album by Kristin Kontrol on its May 27th release date (coincidentally the same date I first saw the Dum Dum Girls live in 2012 – see story here).

One of my initial concerns is the idea that somehow the Dum Dum Girls material feels like it’s being dismissed – like somehow it is hasn’t been a true reflection of Kristin.  It hurts to think that, because her songs have been so damn important to me.  Her authenticity has always been a part of her appeal.  How much more personal can one get when the cover of her first album (2010’s I Will Be) is adorned by an old polaroid of her mom who had passed away after a battle with cancer (of course chronicled on the heartbreaking powerhouse that is 2011’s Only in Dreams)?  But, what makes something authentic?  If she wrote all of those songs as fictional stories, would they be any less impactful or authentic?  Why is it okay for a fictional movie or a novel to move us, but not a fictional song?  Why is it okay for musical icon, David Bowie, to change his artistic identity every few years, but no one else?  Didn’t Bowie build an impressive cutting edge catalog by mixing things up and always keeping it fresh by looking for new inspiration?  Not everything he did was perfect, but much of his genius spawned from his ability to keep things vital and to keep himself engaged all the way to the end.  Kristin is providing herself an opportunity to shed the pre-conceived notions and expectations that we have of her and to actually give us a fuller picture of who she is.  What could be more authentic then that?

The album opens with the mid-tempo “Show Me” and it’s huge 80s sounding drum machine snare beat, a Psychedelic Furs inspired saxophone melody, and words of unconditional love.  It’s Kristin’s fantastic voice that raises this song (all of her songs) to another level.  The energy gets ramped up on the stroll down “White Street,” as a squalling guitar rides along a stuttering dance beat.  It carries that dance club street cool chic that the Furs tapped into so well with “Heartbreak Beat” back in ’86 and is undeniably addictive.  In “(Don’t Wannabe)” Kristin sings with her cool menthol flavored Christina Amphlett voice: “my unhappiness offends me,” perhaps a reference to much of her past work, as the song fittingly blossoms from an atmospheric opening into a big bright full blown pop song.  Meanwhile, the throbbing rhythm of the title track “X-Communicate” is still taking its time on winning me over.  It’s overblown chorus and repetitive sound are just so far removed from where I’ve gone musically, since I was about 15 and still spending all of my money on 12” dance mixes.  However, it’s that New Order-esque guitar outro that hints at “Bizarre Love Triangle” greatness.  Similarly, the giant pounding techno beat of “Skin Shed” is an unexpected detour, but it is easy to get lost in its dreaminess and slow burning musical tension.

The album begins to lose a bit of steam for me at this point, but does not lose me completely.  The most rock song on the album, “Drive the Night,” oddly feels like a throwaway, while the near power-ballad “What is Love” begins with ominous piano and synth atmospherics before spreading into a crossover bound Lone Justice - tinged chorus.  “Face 2 Face” and it’s boisterous arching sounds are somewhat fatiguing, while “Going Thru the Motions” remedies this with another cool song that has the same kind of streamlined Euro-reggae sunshine sound that Bananarama employed on “Cruel Summer.”  The earnest pleas of the closing heavy sounding “Smoke Rings” is likely the most reminiscent of Kristin’s previous Dum Dum work, as she sings of trying hard to reignite that certain spark that keeps us all going.

Kristin put the album together with Kurt Feldman (I know him from the Pains of Being Pure at Heart) and Andrew Miller, who played guitar off and on throughout the history of the Dum Dum Girls, and yes, it is quite a departure from where she’s gone before.  Though it is not what I was hoping for, I find myself caught up in most of the songs on this record.  Her sudden bold positivity is infectious.  Kristin has thrown aside any pre-conceived notions as to where she will go next.  What I do know is that she will continue to inspire by going in with all of her heart, which is what makes her such a compelling artist.

Identity is a helluva thing.  We spend much of our lives trying to galvanize an identity – sometimes scratching and fighting for one, but do we ever achieve what we’re looking for, or was our identity simply there the entire time?  Isn’t our identity essentially a collection of our body of work – positive or negative decisions and actions taken along the way?  As humans, we aren’t one dimensional.  We each have our varied tastes and cannot be pigeon-holed into simple categories, though we try to do this to everyone and everything – all while not wanting to be classified and placed into a neat little box ourselves.  It took a lot of guts for Kristin to throw aside the artistic identity that she has so impressively forged over so many years and begin anew.  However, would I have given her the benefit of the doubt, if she had released this same album under the Dum Dum Girls name?  I’d like to think so, but I cannot be sure.

Posted by chriswreckage at 10:45 AM No comments: