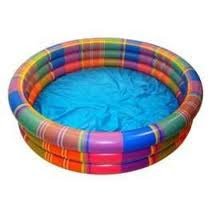 The sun shines down upon the front door of Harrison and Sara’s condo with an increasing intensity as the day nears noon and the freshness of the summer morning air burns away to stifling. A demented menagerie of summer related items litter the sidewalk. A pink flamingo leans against a tree about 15 feet up the walk, while a kiddy pool sits in the middle of the sidewalk impairing the travel of anyone who may happen to pass this way. Two folding lounge chairs are set up against the building in front of the pool. There are two young and attractive girls that move towards this mess.

“OMG! There are so many hot guys around here!” the brunette with tight fitting jeans and a tank top tells the blonde excitedly. “Two words for the guy back there: Buns of Iron!”

“Don’t you mean four words? Abs of Steel!” retorted the blonde as she reached down to adjust her short shorts. “These guys are everywhere and probably rich too!”

“I LOVE SUMMER!” both girls shout in unison and begin to giggle.

Their dialogue ends as they reach the plastic pool blocking their path and they begin to navigate around it in silent contemplation.

Suddenly Harrison rockets through the screen door in the attire of one of his alter egos: King Summer. He’s sporting a gaudy Hawaiian shirt, mirrored sunglasses, a Panama hat, a neon green zinced nose, Ocean Pacific long swim trunks and pink striped flip-flops. He’s carrying a huge fishbowl of green liquid, that overflows with tiny umbrellas and exotic fruit, which he extends outward like a chalice. He clears his throats for an announcement.

The brunette nearly stumbles into the pool from shock. The blonde girl grabs her hand and shouts “Run!” as they tear off up the sidewalk, almost running into Chuck who is approaching the condo from the opposite direction. Harrison continues to stare into the blue sky as if he is waiting for a response to his announcement from the heavens.

“AND IT IS A WHOPPING DEL SCORCHO HERE IN DOWNTOWN PORTLAND!” Harrison continues his announcement to the neighborhood. He holds his pose for a few moments longer, before his eyes start to dart around with concern. “That was your line.”

“Why?” Chuck asks as he reaches Harrison’s side. He is wearing casual black shorts and a silk shirt that is identical to “The Daddy,” a shirt that played a vital role in the prior evening’s activities.

Harrison plops himself onto one of the folding chairs, careful to balance the huge glass in his palm.

“AND IT IS A WHOPPING DEL SCORCHO HERE IN DOWNTOWN PORTLAND!” he repeats with a bit less enthusiasm and is once again met with silence. “And?”

Chuck looks down at Harrison and sees his own reflection in the sunglasses. “What are you doing?” he asks and turns toward the direction the two hot girls ran off to. “Did you do something to them?”

Harrison uses his mouth to blindly search for an unseen straw amidst the jungle of fruit in his fishbowl. His nose knocks several items off the rim and then he gives up the effort.

“KING SUMMER DECLARES THE ARRIVAL OF…” he holds his free hand out by way of introduction.

“You got a beer or something?”

“BEER? ROYALTY DRINK NOT SUCH AS THAT! THE WENCHES HAVE MADE SOMETHING ELSE FOR THE PRINCE!”

“Were the wenches the ones who went off running?”

Harrison, ignoring the question, carefully sets down the drink and leaps into the condo. He continues his monologue inside: “KING SUMMER’S DEL SCORCHO EL ESPECIAL!” Chuck hears him, puts his hands on his face and begins to nod his head side to side. “YES, FOR THE PRINCE! I WILL GIVE HIM YOUR LOVE, MY LADY!”

“If only this could be blamed on heatstroke,” Chuck mumbles to himself.

King Summer returns to the sidewalk with another leap and another giant fishbowl glass. This time the liquid inside is a deep red with nearly half a pineapple floating within.

“COME AND JOIN ME BY MY SIDE! RELISH THESE JUICES OF PARADISE!”

Chuck begins to fumble with the other folded chair still leaning against the building. No matter what he tries, the chair will not unfold. He is clearly getting agitated. “Fucking chair!” he shouts as he slams the still folded chair against the pavement.

“You have to get into character,” Harrison tells Chuck in his real voice. “That is the problem with you. It is all about the character!”

“Okay, how about this character?” Chuck starts with a threatening tone, as the chair unfolds itself. He immediately sets it down next to Harrison and sits down, as he continues: “I’m Prince Pissed Off and my minions will Del Scorcho your stupid ass!”

“You’re missing the point. This is all about the screenplay.”

“Oh, yes, that’s right. You mean the one without the plot?”

“So much negativity,” Harrison waves the back of his hand at Chuck, who has spilled some red liquid on “The Daddy.” “Look at how many movies have been made without a plot. It’s all about the characters. They are the movie! No one cares about whatever Steven Segal’s motivation or purpose is. Don’t mess with the cook! Come on! Hell, people will pay ten bucks as long as he is beating ass. They’d pay more if his next nemesis turned out to be the Swedish Chef from the Muppet Show.”

“So, I’m seeing King Summer versus Segal. Who can make the worst drink?”

“Herdy Ferdy Foo,” Harrison waves his fingers around as he loses himself in his Swedish Chef impersonation. “Fine!” he shouts as he regains focus, “Bitch all you want, but the bottom line is that I am right and you are scared.”

Chuck ignores him and adopts a deep announcing voice: “Segal. King Summer. Taste the wrath. It’s not fear, but reality!” Chuck gives it up. “Okay, I agree, there have been some big box office hits that have no actual plot, but…”

“What? Then with the right characters we can have a big, plot less, box office hit too. Good characters are what people go to see. All we need to do is find them.”

“What? The people who would watch that shit?”

“No, you jackass, the characters. Characters are where it’s at. Without memorable characters, it doesn’t matter how good the story is.”

“Good point. So where do we find these new friends of ours? I hear 7-11 has some solid characters on sale now! Not only that, but with the purchase of a new character, you can get a free Thirsty Two Ouncer and a Big Grab of Chipsssssssss!” Chuck trails off.

“Alright, fine,” Chuck concedes as he stands as well.

The two begin to head down the sidewalk in the direction the two girls had sprinted off to earlier, leaving the summer wreckage behind them with their drinks still in hand.

“Sara is going to be pissed about this mess,” Chuck points out, now several yards away from the debris.

“Nonsense, she appreciates our art.”

A skateboarder winds his way around King Summer and Prince Celsius after building up an enormous burst of speed. Unfortunately, his efforts to avoid those two left him distracted and he hits the pool at full speed and crashes over the top and onto the hot cement.

“She will awake from her slumber to find us missing.”

“And hope that we’ve been abducted.”

“And realize that the muses have claimed us.”

“Praying that we never return.”

Posted by chriswreckage at 4:45 PM 2 comments: