It’s fitting that I have spent this entire Sunday so far listening to music.  I just learned that Lou Reed has passed away.  Without the music he and John Cale, Sterling Morrison and Maureen Tucker created as the Velvet Underground, pretty much none of the music I so enjoy today would be the same.  They are the predominant influence for the styles that I generally gravitate – music that can be harsh and pristine at the same time; music that can be simply constructed but filled with complex stories and emotions.  Reed’s influence is so massive that the entire feed of my Facebook page right now is filled with tributes from nearly every artist or band that I “like,” all of them proclaiming a love of his music.

This sad news came to my attention just as I logged in to my computer to write a new music synopsis.  It is one meant to be an experiment.  Since I’ve started whatever this Blogger page is, I have begun each year with a listing of my favorite records of the prior year.  As each year ends, I wait too long before writing the 40 or so pieces for each artist in the “countdown,” and I always feel stressed and burned out by the end of it.  My goal, at this point (I am not good at promises or proclamations), is to begin 2014 by writing about new music, as it comes into my life, as the year progresses, instead of saving it all up till the end.  My hope is that this will sharpen my writing and listening skills, keep me more connected with the music that inspires me, and lessen the load at year’s end.  I’m certain that I will question my motives for writing about music at all during the several expected points of discouragement that will overtake me along the journey.  Yet, I know that no matter what, it is my love of music and passion for trying to share that love that will keep me returning no matter what – whether I want to or not.  This experiment will change the way I listen to and absorb music and maybe this will reignite my spark.

So, here it goes: The home recording husband and wife duo, Drakes Hotel, currently residing in Iowa, was nice enough to send me an advance copy of their new CD EP and it moved me to try to write a piece about it.  It will be released on November 12th. 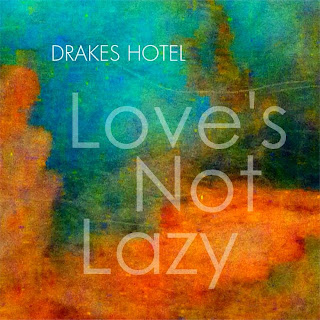 Drakes Hotel is on a hot streak!  This five tracker, their first EP, comes a little over a year after their last full length, Logic Adopts Senses (my #17 pick of 2012, seen here), which is ahead of their release every 2-3 years track record.  They must be feeling inspired, because this EP includes some of their best work yet and word has it that they will be releasing a series of EPs in the near future, as well as doing some touring in the new year.

The EP starts off with the extended melancholic “The Night Train Home,” where Amy Drake’s unique, strong and stellar vocals are placed fully out in front of the mysterious and haunting soundscape underneath.  This song would make a perfect soundtrack for a night time train ride - lost in thought, because it absolutely evokes that feeling of reflection and decompression.

The upbeat “Young Taste” is up next and finds DH getting right to the point with a fairly straightforward rock song that screams single!  The lyrics are thought provoking.  It seems to be spelling out some relationship troubles within each verse, while the chorus (which includes near power chords!) stretches the theme to a potentially more universal problem with relationships in general in a world of social media and over sharing.

The centerpiece, “Leave It Dark,” includes everything there has ever been to love about this duo.  The sing-a-long chorus is not only full of wisdom, but is catchy as hell, while the simple repeated piano refrain creates a solid tuneful base for Chris Y’s stellar guitar work that reaches for the stratosphere throughout – reminding of the graceful striving cascades that the House of Love created with “Love in a Car’ oh, so many years ago.

It’s amazing how much variety Drakes Hotel achieves with their modest recording tools, but “Sense Non Sense” is a huge sounding song that is full of open space and an atmospheric keyboard line that instills a sense of intrigue that is so attractive about their music.  Maybe this song would be better served as the hit single with its huge musical climax and its tale of a dying relationship, which is succinctly and memorably told (“We had a lack of progress / on a bed of promise / all we used to be got all fucked up”).

Finally, the EP closes with the dramatic and hopeful sounding “Sick Apart,” which again addresses relationship issues and miscommunication or lack of within, but seems to find that there can still be a strong enough core to survive and even thrive.  When Amy sings near the end “Keep holding me…I’ve wanted you for so long,” it feels as though everything will be alright.

Please do yourself a favor and track down this music (their last three albums can be found at CDBaby.com).  It is a journey well worth the price of admission.

Posted by chriswreckage at 3:21 PM 3 comments: