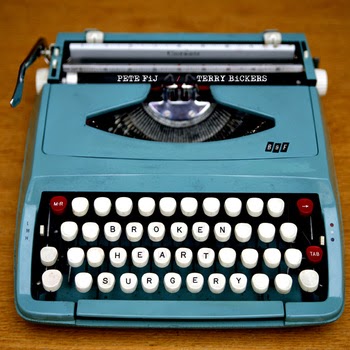 I’ve been sitting in front of my laptop for what seems like forever, trying to come up with something clever to say about Broken Heart Surgery - this collaboration between Pete Fijalkowski (formerly of Adorable and Polak) and Terry Bickers (of the House of Love and formerly of Levitation), which has been on repeat the entire time.  Luckily, it finally just dawned on me that I am incapable of cleverness, so I should just get on with it.

These two guys are behind some of the most exciting, influential and amazing music I have ever encountered.  I get misty eyed when I think of the first time I heard the House of Love’s stunning “Christine,” or the thrilling drive of Adorable’s “Sunshine Smile,” but those songs were a long time ago and I hate to say it, but sometimes “super groups” or collaborations between musical heroes are often lackluster or disappointing.  Wisely, Fij and Bickers have slowly and quietly unveiled their shared musical vision.  It now seems like ages ago that the embittered ballad “I Don’t Give a Shit about You” reared its sardonic head teasing us with its tasteful simplicity.  And it’s this simplicity that makes this album so damn perfect.  Instead of each of them trying to somehow recapture their youthful exuberant work and potentially creating a mess, they instead have created a singularly focused album, where every damn song is about breaking up and dealing with the notion that if you’ve just broken up with someone, then that means that up to that point, well, you’ve failed in that department every step of the way for a lifetime.  In other words, the entire collection deals with that fine line of self doubt, disgust, anger, sadness and hurt of a freshly collapsed love affair all wrapped within a wry sense of humor.

The opening “Out of Time” sets the mood for the entire album.  A softly strummed acoustic guitar guides the way as Pete Fij states reasons why this latest relationship has failed entirely in terms of technology vs. romanticism, while Bickers’ stellar guitar melody elevates the song to a higher level.  Similarly, “Downsizing” places this failed relationship into business terms, which then sends our broken hearted narrator into seeking love rehab at “Betty Ford.”  Elsewhere, in “Breaking Up” he laments how she gets all the good stuff from their split (“she got the car keys & I got run over”), while “Loved & Lost” is two minutes of quiet clichés (“It’s better to have loved and lost…”) that abruptly ends with a threat to those who perpetrated such notions.  It’s this sense combination of humor and sadness that keeps this album from falling into a complete abyss, as well as the restrained, but subtlety fleshed out melodies of each song.

Naturally, I gravitate to the real heartbreaking moments of fragility of the collection.  “Parallel Girl” evokes heaviness with a tasty John Barry guitar line and a descending atmosphere, while Fij sings of the one that got away and imagining a parallel world where things actually turn out right.  Meanwhile, “Sound of Love” begins with a sense of hope (“the licking of her lips / just before the kiss”); before we soon learn that the sound of love is really the lingering memories of the good moments and the sounds of his former partner leaving.  Then there’s the painful realization in “Gravity” that we rarely can have what we most want.

Broken Heart Surgery is, simply put, pretty damn perfect.  I recommend you find out for yourself.

Posted by chriswreckage at 10:27 AM 2 comments:

All I Remember is Waiting 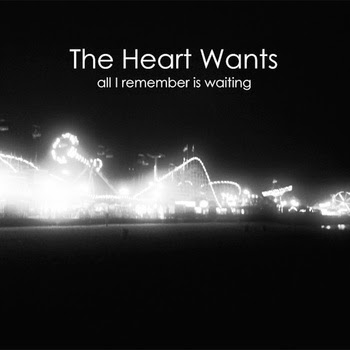 The Heart Wants
All I Remember is Waiting
(Junefourth)

It was maybe a little over a week ago when I felt like giving up this act I act of writing about music releases that have me currently inspired and excited.  The entire point of writing these things is to help expose musicians to a wider audience.  Of course, silly me, I forgot to go out and find an audience.  However, after either receiving news of upcoming albums by favorite artists, learning about some intriguing new artists, and then picking up a few new items last week, I decided that I just don’t care.  I’m going to share my thoughts anyway and hope to connect at least one person to a band somewhere along the line.  Good music gets me every time.  I cannot shut up.  Amongst the new items, the most immediate release comes from The Heart Wants, because this collection is being released as a digital download only.  So much of the music I buy on vinyl or CD is via mail order, so I often have a lag time between release date and actual arrival.  It’s also immediate in sound and has been on repeat around here for the entirety of the last week.

The debut album from The Heart Wants is actually a solo outing by Chris Y from Omaha’s Drakes Hotel.  If you are one of the only ones out there who have read any of my rough, unschooled music writing over the last several years, you will know that I am a big proponent of this fantastic duo (see references galore here).  Chris Y is the multi-instrumentalist / sound guy from that group, who very occasionally takes over lead vocals, but now we get the opportunity to hear more and not surprisingly, this is really enjoyable.

All I Remember is Waiting is not a far cry from Drakes Hotel, so if you’re already familiar and a fan, this is a must.  What may be the most startling is the sheer pure pop that we are introduced to from the get go.  The opening song, “Astronomical” has the familiar Drakes drum machine and the sparkling meshing of guitars and keyboards, but Chris Y eschews some of the veneer of mystery and intrigue and goes straight for the catchy direct hook and a chorus that is wordy, but still gets lodged into repeat mode into the consciousness.  And don’t get me started on that upwards bound guitar line and the chiming bridge.  This rivals the best pop nuggets of Ian Broudie’s sometimes brilliant Lightning Seeds 25 some odd years ago.  The similar sounding ‘Tales Like Factories” again provides busy breathy harmonies during each verse, before opening up into a direct hit chorus (which features an Amy Drake appearance on backing vocals).  I’ve never so happily sung “your heart dies” to myself so much.  Another three minute upbeat pop single comes along with “Evil Friends,” which closes with a majestic orchestral style keyboard flourish that for some reason reminds me of the beautiful instrumental second half of New Order’s goofy “Every Little Counts” (Brotherhood 1986).

The amazing music and lyrical imagery that help make Drakes Hotel so impressive continues unabated throughout All I Remember is Waiting.  “Leave the Scene” is a mid tempo exploration and reflection about ridding oneself of life’s regrets, mistakes and stumbles.  The clever chorus of “leave the scene on the cutting room floor” is a nice idea, but then we begin to realize that song is really a plea to an unrequited love and the palpable sense of loss and impending heartbreak makes the idea of getting rid of certain “scenes” more urgent.  “Currents in Shade” a dark sounding slow burning song that introduces some striking piano into the musical mix and evokes the darkness of a Joy Division song.  Elsewhere, the piano returns prominently on the album’s dramatic centerpiece, “Stay Home.”  The “Procession”-style keyboard wash of “Stay Home” augments the heavy crashing of piano chords (reminds me of the piano on The Hurting – era Tears for Fears - think “Ideas of Opiates”), but instead of feeling the menace of the oncoming storm, this song provides warmth and comfort, especially when the guitars and drums kick in.

The album closes with two of my favorite songs.  “Amelia” is a combination love song and plea for access into the thoughts and mind of his object of affection.  The dramatic chorus is an alarming juxtaposition to the gliding effortless sounding flow of each verse.  Meanwhile, the perfect set closing “Light is Low’ provides a solemn and resigned farewell.  It leaves the listener satisfied, but filled with lingering thoughts and questions.

Again, if you’re already a fan of Drakes Hotel, this will be right up your alley.  If you’re not, well, you should be.  Word has it that a new Drakes Hotel album is on the horizon, so Chris Y’s foray into creating The Heart Wants album only gives us all a chance to hear more of this incredible music!  Couldn’t ask for more.

The Heart Wants "Leave the Scene"

Posted by chriswreckage at 6:47 PM No comments: