There is a young gal who volunteers at the non-profit I work for who has become my hero.  I do not know what issues she’s had to deal with specifically, but I do know that less than two years ago she was in a motorized wheel chair.  She would struggle with one hand to control the levers that operated the chair and she would arrive with her fellow classmates in a bus from a local High School – all under constant supervision.  I was often in a position to provide tasks for these students, as part of their volunteerism/therapy.  She was always the quietest, as she seemed to struggle to communicate, and she was seemingly the least motivated to get involved.
In the spring of 2014, I was invited to a graduation ceremony for many of these students.  I found myself overcome with emotion, as the teachers and administrators gave out awards and certificates to these kids and told stories of their burgeoning independence.  It was touching to learn about their strides and efforts made throughout their time at school.  It made me realize, more than ever, not to take anything that I do have for granted.  But then, of course, I kind of forgot.

Last Halloween, I experienced a hemorrhagic stroke.  The genetic disorder Von Hippel Lindau (VHL) that I’ve written about in these pages numerous times before ( like here) was the culprit.  I had a small hemangioblastoma that decided to burst, which, while wandering the streets, trick or treating with some friend’s kids, caused a major headache, nausea and an inability to walk without drifting sideways.  Of course, I did not know this at the time, nor did I seek medical help for a couple of days – thinking things would improve, which is strange since I was with a close friend when he had a stroke and I’ve seen the horrific damaging effects of a brain hemorrhage on my brother.

After Halloween, things got much worse.  First, I had another brain bleed and it wasn’t long before I lost the ability to walk at all, while also losing control of my left side.  I spent much of November and December in the hospital and half of January in an inpatient rehabilitation hospital.

During these extended hospital stays, my life became centered around very basic things.  Did I have a bowel movement today?  Can I touch my nose and touch my doctor’s index finger alternately with the index finger of each of my hands?  Can I stand without holding on to something for support for 30 seconds without falling?  You get the gist.  I found myself super excited and incredibly nervous when my physical therapist had me walk a few steps without aid and I was able to do so.  I found myself overcome with a huge swell of emotion when I was able to stand and touch my left foot to a step and return it with actual control and without violently falling to my right like I had every previous time.  These tiny victories were the only things that motivated me and continue to keep me going to my weekly physical therapy appointments.

Once again, I am now able to drive.  I am able to walk with the aid of a cane.  I am able to shop for groceries and make my own simple meals.  I can do laundry and kind of clean my apartment and myself.  Everything takes more effort than I could’ve ever imagined prior to the stroke, and it all takes a lot more time than it ever used to.  My left hand seems to continue to do its own thing, which is a constant frustration, but I am getting by.

I see that same young gal volunteering at work a couple of times a week now that I am back at work.  She continues to come in, except these days she comes in on her own.  She has progressed so that she stands on her feet and uses a four-wheel walker, in place of a wheelchair, and she travels to and from the work place on the regular bus completely on her own.  She is always bright and cheery and outgoing and she now does projects that take fine motor skills without hesitation nor does she ever show frustration.  She is amazing!  She has gained so much independence and has achieved so much in such a short amount of time.  She is such an inspiration, as she continues to gain her independence, and she has taught me so much.  I can only hope that I progress and achieve as much as she has.

Posted by chriswreckage at 2:41 PM 3 comments:

The Art of Telling the Truth 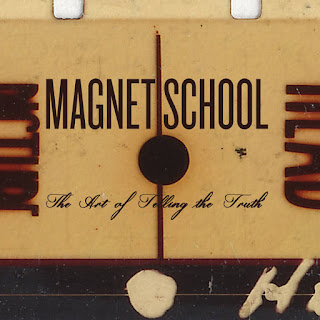 Magnet School
The Art of Telling the Truth
(Shifting Sounds)

It was way back in 2013 that I was introduced to the smashing two song single “Fur & Velvet” from Austin, TX four-piece Magnet School (#26 from 2013’s best of here).  Thankfully, the band continued their diligent work and did not disappear on us, because The Art of Telling the Truth is an outstanding collection!  In my review of “Fur & Velvet” and the menacing crawl of the dangerous sounding instrumental “swandive,” (both included on the LP) I referenced the heavy twin guitar attack of the Swervedriver, which I still stand by, however, the production and the soft blending of the exploratory guitars of Michael J. Wane and Mark Ford remind of Ferment-era Catherine Wheel, which is about as high of praise as I can offer.  Yet it’s the cranking rhythm section of Brandon Tucker and Erik Conn that ground the intertwining guitar melodies and layers of controlled feedback.

This is not necessarily what one would normally expect from a Texas band, but these days with the great shoegaze focus of Fort Worth record label Saint Marie, and bands like Austin’s all over the map Ringo Deathstarr, to the promising postpunk of the debut EP from Dallas’ The Hourly Radio (going back like ten plus years ago), I guess one never should pre-judge.

I love that there are three instrumentals among these ten songs, because Magnet School’s strengths lie in their ability to paint a vivid and exciting picture with their music alone, yet songs like “Fur & Velvet,” the opening “We Were Golden” and the rainy melancholy of “British Monuments” are all sing-along catchy.  Meanwhile, the soaring “Irresistible Lie” and “So Long to the Heavens” (both of which bring to mind Camden’s debut Reel Time Canvas from the turn of the century) find the vocals down in the mix, not rising above the fantastic arrangements.  The penultimate song, “Red Giant,” is a down tempo number that has explosive turns, all while seemingly overstating the importance of a fierce breakdancing throw-down (not really sure what’s going on, but it’s still one of my favorites here).

If you enjoy dreamy guitar rock – with an emphasis on the “rock,” then this album should be most pleasing to your ears.  It is available in three different colors of vinyl as well, so pick up a copy while supplies last and be sure to play it loud! 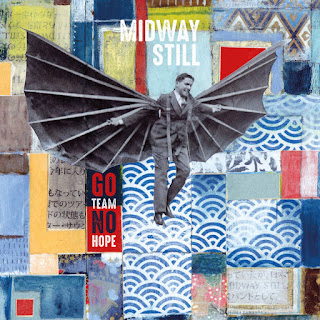 It’s albums like Midway Still’s latest (Go Team No Hope, their sixth LP, due out March 18th) that keep me going and the very reason why I love music so damn much.  This band inspired me back in the early 90s with their brand of punk rock, which was more in favor back in the post-Nirvana haze, and now, almost 25 years later, they’re about to unleash their best album yet!

In fact, when I listen to the frenetic opener, “Wicked World,” I feel like I could be that hopeful younger kid rocking out to “Wish” or “I Won’t Try” back when turning thirty seemed a world away (not to mention forty).  It’s refreshing!  Yet, at the same time, many of their songs are written for the older, the downtrodden, and the hopeless.  There’s no reason why we can’t pump our fists, play air guitar, and try to bounce around to instantly memorable kick ass songs like “Where’s Your Sunshine?,” “Hey Summer,” and the momentum gathering “Can’t Take It,” where drummer Declan Kelly goes about beating his drum set into submission (How does he do it?  My arms get tired just thinking about it).  The odd “Insect Limbs” reminds of SST era Dinosaur Jr, as bandleader Paul Thomson adds a layer of strummed acoustic guitar to the mix to lighten the sound a tiny bit inside the din of buzzing electricity.  Plus, like on their last album (2012’s Always Ends), there are two absolute stunners: the ultra-catchy “Only time Will Tell,” an earworm that I never want to lose, and the sharp and stuttering “Don’t Walk Away.”  “Only Time Will Tell,” along with the sort of ballad, “Next Life,” and the closing ode to the lost people of the world: “Go Team No Hope,” would all make excellent feature songs in an updated John Hughes flick, where the protagonists are still trying to find their way well into middle age.  Actually, scratch that, this album is better than that – the whole freaking thing should be played on repeat any time one needs to turn the volume up to 11 and let loose.

I say this about a lot of criminally overlooked musicians, but it amazes me that Midway Still aren’t more well known then they are.  Music this good – this addictive – should be heard and enjoyed by the masses.  Dive in now before they decide to disappear on us again.

Posted by chriswreckage at 3:46 PM No comments: