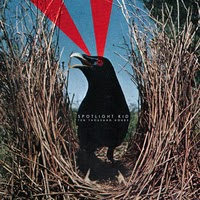 The past few years have been a great time for me when it comes to music.  There has been quite a revival of new artists who have been heavily influenced by the types of music that first captured my endless attention so long ago.  I want to shout it out to the world!  Unfortunately, my voice gets lost among the million plus other people doing the same thing and what makes my opinion more important or distinctive than anyone else’s?  Nothing.  I am simply a fanatical music freak who gets all worked up and cannot shut up about how cool I think this stuff is.  I wish I could do it justice.  I wish I could convince people out there that it’s all worth a close listen and repeated listens.  I absolutely want these artists to be able to continue their art and the best way is for them to make a living at it.  And I want to talk about it.  I want to be turned on to other artists who may inspire me along the way.

At the moment, I am listening to the third album from UK six piece Spotlight Kid Ten Thousand Hours.  I have been anticipating this release since last spring and summer when they released two digital singles that dazzled my heart and mind: “Budge Up” and “Sugar Pills” (both included here).  I wrote about them at years’ end (my #17 pick of 2013 here) and will sadly most likely not do them any more justice than I managed to squeeze out at that time.  “Sugar Pills” smashes onto the scene here, after a brief pleasant instrumental title track, just as singer Katty Heath declares: “Like a lightning bolt and a jolt to my soul.”  This damn song gets better every time I hear it.  The relentless pounding drums, the flood of atmospheric noise that feels like fresh spring air coming through wide open windows.  It begs for increased volume and complete rapt attention.  So too does that other single “Budge Up.”  The dramatic intensity of the song is both thrilling and exhausting.  By the time the song reaches its Pixies “Tame”- like climax, we are completely wrung out on the emotions fueling the song.  The other pre-LP sneak peak, “Can’t Let Go,” is another scorcher that reminds of the exciting forward momentum that many of the songs on their second LP, 2011’s Disaster Tourist, contained, or tried to contain.

Elsewhere, we find the bubbling brightness of “I’ll Do anything.”  This song’s sparkling music and Heath’s terrific voice are as addictive as the crush described and yet the endlessly repeated guitar line creates a hypnotic and mildly melancholic effect.  The very grinding rocker that is “A Minor Character” glides and explodes with energy and a bitter dismissal in the chorus: “you’re such a minor character in my life” (one minor complaint: this song is not recorded with the same fidelity as the rest of the collection.  It lacks the same depth and richness.).  Meanwhile, the rich, electronically based instrumental “Hold On” provides a chance to breathe and at various moments reminds me of early Art of Noise.  While the bigger sounding mostly instrumental (one repeated lyric: “smile – only want to make you”), “Bright Eyes,” glides and grooves and goes all interstellar.  Finally, the closing powerhouse is actually the title song that was seemingly absent from their last album, “Disaster Tourist.”  The striking hot guitar line of each verse absolutely goes haywire and overloads into a My Bloody Valentine-style disorienting meltdown in each instrumental chorus.  It is stunning and remarkable.

So, why haven’t I tracked down their debut album yet?  I promise to get on that task, if you promise to check out this new album.  Now, to get them to perform somewhere near or in Oregon….

Posted by chriswreckage at 6:10 PM