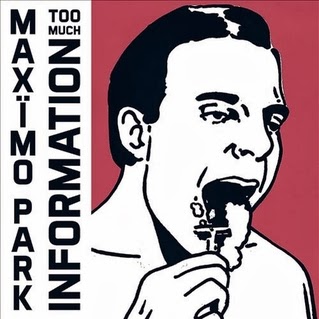 I am thankful for bands such as Maxïmo Park.  They have now released five consistently excellent full length albums over the last nine years without line-up changes.  This is a band that retains its original passion and continues to progress as they craft each new entry into their cannon.  Sure, the full-on whoosh of their debut, 2005’s A Certain Trigger, has mellowed some over the years, but their ability to capture heart pounding tales of love won and lost, empathetic politics, and lost literary moments all within really catchy (oft-described as “angular”) tunes has never waned.

Their first album was one of my favorite albums of 2005.  It was like sugar rush that I never wanted to come down from.  It remained in my car player for the better part of a year and my frantic drive-dancing, air drum fills, and attempts at keeping up with Paul Smith earnest and energetic vocals most likely had me in several near accidents, but it didn’t matter.  The album remains an instant quick jolt of adrenalin every time I decide to put it on to this day.  The swift step of the opening track “Give, Get, Take” hints at the breathless sprint of their debut, as does the two minute pound of the ode to activist author Audre Lorde, while the heavier, but in your face “My Bloody Mind,” whose rousing fist pumping chorus rescues the off-kilter opening couple of verses, actually gradually and subtlety unwinds into a quiet piano sprinkled fade out.  And so, it is notable to me that my early favorites on this new album are actually some of the quieter moments (like that tasteful piano) in the collection.  Guitarist Lukas Wooller channels a delectable Johnny Marr lick on another literary referencing “Lydia, the Ink Will Never Run Dry” on which the band finds a tight groove reminiscent of the Smiths’ breezy “Some Girls Are Bigger than Others, only more substantial.  Meanwhile, the slow burn of “Leave This Island” captures the point between desperation and resignation as the protagonist watches their love prepare to leave (“Tell me why there’s a map on the table / It’s a pack of lies – it’s not a peak, it’s a plateau / Let me know when you want to leave this island / let me know when you want to hear my point of view”).  Later on, another mid-tempo instant classic, “Drinking Martinis,” sets a wistful and airy stage as Smith reflects on past good times with someone long gone and wonders if that person has that same fondness of their shared past (“Now that you’re gone / do you feel anything?”).  The crystal clear build up of “Midnight on the Hill” is another spectacular moment that opens this song into one that feels like it’s always been a favorite.  Smith’s pleading voice vividly places us into his reflections of happier times as he tries to come to terms that they are now lost to time.

Too Much Information is a great ride.  The band may have softened their edges and their relentless attack, but what we’ve gained along the way is a band that can put together a varied and rich album.  There are new touches and progressions like the wonderful moments of background vocal harmonies throughout and there’s the dance inducing echo chamber of the first single “Brain Cells” - an interesting new direction (I too wonder and worry about my brain cells decaying as I plod my way through uninspiring day after day), while the closing “Where We’re Going” strums along casually and finds solace in letting someone else take the wheel.  It’s inspiring to see a band stick it out through thick and thin, continue to grow and expand their sound, and yet retain their strong personality and passion.  Well done!

If you’re lucky and find the early editions of Too Much Information, you can be privy to a second disc of six cover versions (a la Veronica Falls’ covers EPs).  Other than reworking a few lyrics and the title to the Fall’s “Edinburgh Man” to “Middlesborough Man,” these covers are all faithful to their originals.  They take on Townes Van Sandt’s country lament “I’ll Be Here in the Morning,” Leonard Cohen’s endlessly catchy “Lover Lover Lover,” Nick Drake’s beautiful “Northern Sky,” the landmark single “Final Day” from Young Marble Giants and finally Mazzy Star’s most popular “Fade into You.”  The EP is like a cool mix-tape from an old friend.

Posted by chriswreckage at 6:24 PM